A Contextual Translation of the Glorious Qur’an

A Contextual Translation of the Glorious Qur’an

Based On The Sayings Of The Prophet Muhammad (peace and blessings be upon him), His Companions, & The Classical Quranic Commentators

Based On The Sayings Of The Prophet Muhammad (peace and blessings be upon him), His Companions, & The Classical Qur’anic Commentators

There exists today in the English language, various translations of the Qur’ān—each claiming to be the best in terms of correct belief and interpretation, as well as clarity and coherent language. What is clear however, is that many fall short in some, or all, of these success markers—leading to a proliferation of translations that are either highly literal, out of context, poorly represented, deliberately misinterpreted, unintelligible, or some combination of the above.

Translation from one language into another is not just the process of converting data. Rather, it implies that the information and knowledge should be understood in the context of the first language, and this should be in a manner which is comprehensible and clearly conveyed in the second language. The principles of translation used in this work include the importance of context as a means to translate appropriately. Purely literal, or non-contextual translations often leave the reader bemused—even confused—regarding the intent of Allāh. Here, however, we as translators have focused strongly on providing context and meaning. This is done in two ways: firstly, by giving each verse its intended context; and secondly, with endnotes that explain and reinforce the meanings of the verses.

The context in this case is the appropriate Tafsīr (scholarly works which explain the meanings of the Qur’ān) and Prophetic narrations which contribute to the understanding of each verse. We have, to the best of our ability, exerted great effort in suitably using these sources to correctly portray the context of the verses—however, it is not possible to translate the Qur’ān into any other language whilst retaining the full range and depth of meaning of the origin…

“No matter how many times a person returns to the Book of Allāh, he always finds something to guide him in his life—maybe he reads a name from the names of Allāh, or an attribute of His, or he finds a strong admonition that reminds him, or a description of Paradise or the Hell-Fire, or a story of a Prophet and the past nations, or simply words that lift his spirit and bring him closer to his Lord.” An excerpt from the Translators’ Introduction 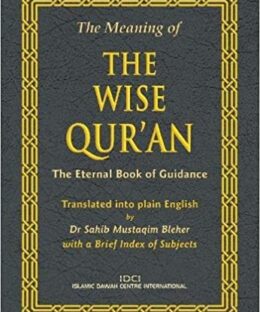 The Meaning of the Wise Qur’an 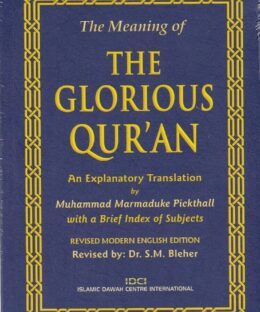 The Meaning of the Glorious Qur’an 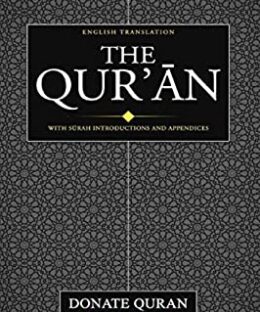 The Qura’an with Surah Introductions and Appendices 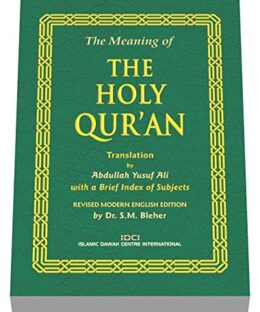 The Meaning Of The Holy Qur’an